Yarram man pleads guilty to charges
ON the evening of Saturday, August 6, a 54-year-old male was arrested by Yarram Police for offences of drunk and offensive behaviour, and breaching bail.
Glen Carroll, from custody in Sale Police Station, pleaded guilty to the charges at the Sale Magistrates’ Court on Monday via video link.
The court heard that Mr Carroll was drinking at a wake before he went into the Regent Theatre where children were performing.
The prosecution said that Mr Carroll, who was on bail, was moving around the theatre and yelling while intoxicated, with the behaviour described as “creepy” and “offensive”.
Mr Carroll was placed on bail again and had his sentencing deferred to Tuesday, August 30.
Any witnesses to the incident are encouraged to contact police on 5182 5033.
Yarram Police praised the community for their assistance in reporting crime as it is happening.

Maffra man charged with murder
A 53-year-old Maffra man has faced court after being charged with murder.
Matthew Wain appeared via video-link at the Sale Magistrates’ Court on Monday, July 18.
The charges follow the discovery of a 50-year-old man’s body at a residence on York Street, Sale last month.
Police believe the man died as a result of injuries inflicted sometime between July 8 and 14.
Mr Wain did not apply for bail and will remain in custody until his case is heard again in December.

Car impounded
SALE Police said they intercepted a vehicle on Dawson Street in Sale around 9.30am on Saturday, August 6.
Checks revealed that the driver was unlicensed.
Police say the 53-year-old male driver admitted that he has never held a driver’s licence in Victoria, in Australia, or any other country.
The car he was driving was impounded at a cost of $1115 due to the driver being unlicensed.
The number plates were also seized as the registration had expired and been cancelled since 2020.

Rural burglaries and deceptions in East Gippsland
EAST Gippsland Crime Investigation Unit detectives have arrested and charged four people after an investigation into a series of burglaries, thefts and deceptions throughout East Gippsland.
Operation Stout, which ran for six months targeting burglaries and thefts in remote rural locations, ended on Thursday, August 4 following the arrests and execution of two search warrants in Club Terrace and East Bairnsdale.
Three people were arrested at the Combienbar Road property before an extensive search uncovered drugs, firearms, a motor vehicle, motorcycle, power tools, heavy duty specialised batteries and a ride-on lawn mower suspected to be stolen.
A 30-year-old man has been charged with burglary, theft of motor vehicles (x2), obtaining property by deception (x10), handle stolen goods, possess cannabis, possess methylamphetamines, theft, prohibited person possess firearm, possess traffickable quantity of unregistered firearms, unlicensed driving and fail to store firearms securely.
The Club Terrace man appeared before Bairnsdale Magistrates’ Court and was further remanded to August 24, 2022.
A 63-year-old man from the same property was charged with possess cannabis, possess unregistered firearms (x4), possess traffickable quantity of unregistered firearms, fail to store firearms in a secure manner, possess ammunition without licence and possess cannabis.
He was bailed to appear before Orbost Magistrates’ Court on November 24 2022.
A 61-year-old woman was charged with possess cannabis and possess MDMA. She was bailed to appear before Orbost Magistrates’ Court on November 24 2022
The subsequent warrant was executed in Humphrey Street, where a 43-year-old man was also arrested.
The East Bairnsdale man has been charged with handle stolen goods, possess cannabis, possess methylamphetamine and possess ammunition without holding a firearms licence.
He was bailed to appear before Bairnsdale Magistrates’ Court on February 15 2023.
East Gippsland detectives were helped by officers from the local highway patrol, frontline members, the Critical Incident Response Team, Dog Squad and the Air Wing.
Detective Senior Sergeant Andrew Mehlert thanked the community for their assistance in this investigation and encouraged anyone with information regarding criminal behaviour to call Crime Stoppers on 1800 333 000.

Rail Safety Week
A MOMENT of distraction can change your life forever, but there are steps you can take to ensure you stay rail safe:
-Take off your headphones when near tracks;
-Don’t rush to beat the gates;
-Stand back behind the yellow line on platforms; and,
-Hold on or take a seat where available when travelling.
Stand back. Look up. Stay rail safe. 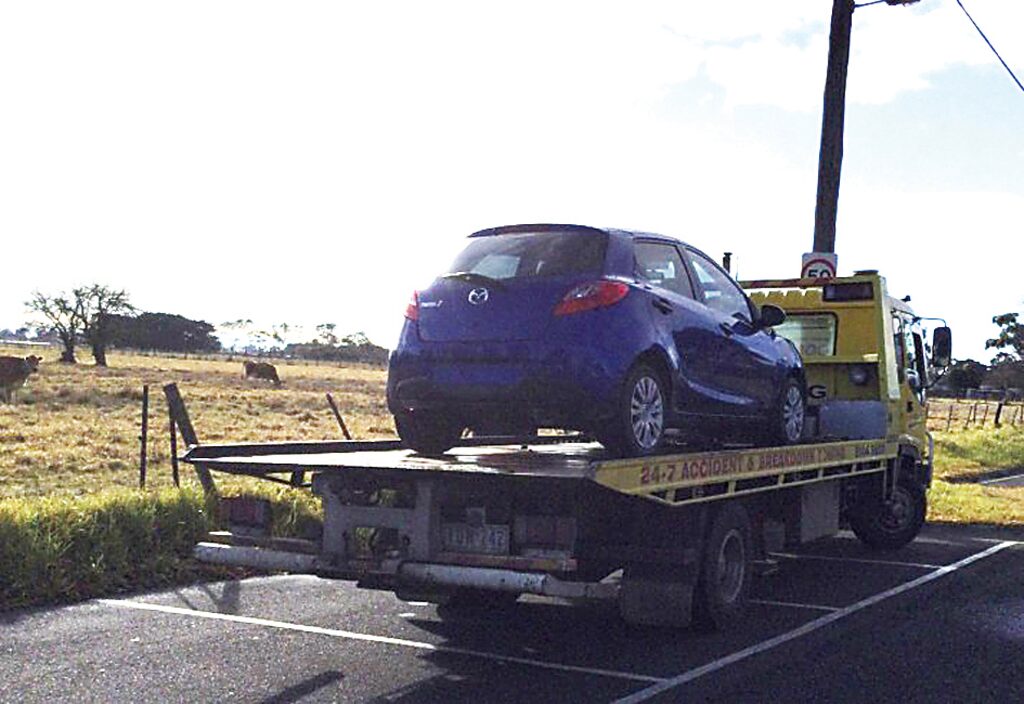 This vehicle was intercepted on Dawson Street in Sale around 9.30am on Saturday August 6. Photo: Contributed